Wanting Workers to Work Like Machines (Bartleby the Scrivener) 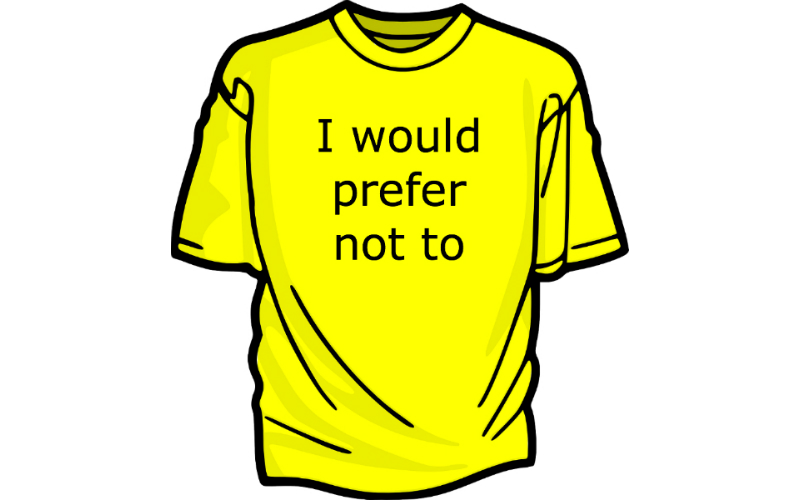 I would prefer not to

During the Industrial Revolution

This topic is kind of obscure. In a course I took on organizational behavior (OB), we were required to read a short story by Herman Melville, called “Bartleby the Scrivener.” It’s a strange story, written in 1853 – shortly after the industrial revolution made such drastic changes to working conditions and other aspects of society and which we were told the authors of the time were railing against.

The story is about a lawyer who employs copy writers, since at that time, copies still had to be hand written. Bartleby comes to work for him and is an odd character. He will only do the specific task he was hired to do. He doesn’t speak to others – except to say “I would prefer not to” in response to requests for anything other than his assigned tasks. He eats the same food every day, and doesn’t eat with others or socialize.

Eventually, the lawyer discovers Bartleby at the office at night and realizes that he is living there. The lawyer eventually vacates the building to get away from him. The new tenants complain that Bartleby is still there, saying that it’s the lawyer’s responsibility to get rid of him. He is moved to some sort of home, where he just stands doing nothing until he dies.

What Did the Author Mean?

We were asked in our OB class to say what we thought the story meant. Apparently there’s no consensus on what it means. Various interpretations were posted – none of which seemed to explain all the bizarre aspects of the story. I sat and thought about the story – trying to feel into the meaning of it – until suddenly an interpretation came to me that seemed to bring the whole story into focus.

I thought: if an employer wished their employees would work like machines, and could get their wish, Bartleby is what they would get. He is not sociable with colleagues; completely inflexible in taking on a variety of tasks; he has no creativity, ideas or new thoughts; he always consumes the same diet, and can’t function if it’s not available; he gradually breaks down, but can’t tell you why; he takes up space in the office – even when he’s broken down; eventually, you have to deal with the cost to have him removed from the office and taken to the dump where he can sit and rust away; there will never have been any connection with him on a personal level.

I thought for sure I’d cracked the mystery of this story and excitedly posted my interpretation. To my disappointment, not one person in the class indicated that they’d understood what I meant. And to my surprise, even the professor didn’t seem to notice that I’d explained the story more completely – especially in relation to organizational behavior. But hey, we are where we are.

I think it was a shame for those in the class though, because for me, the light bulb that went off about that story has been a lasting and profound insight – and illuminated something I think is true to some extent in many, many workplaces.

I think many bosses wish, to some extent, that employees would just be quiet, leave them alone and do their work – like machines.

Do Bosses Secretly Wish Employees Were More Like Machines?

I don’t think they think this consciously, but I think many bosses wish, to some extent, that employees would just be quiet, leave them alone and do their work – like machines. I even think it would be difficult as a manager or owner not to have this desire to some extent. Managers are under pressure to see the work gets done; owners are under pressure to see the company stays profitable – with as much efficiency as possible. Employees have this problematic, human tendency to be unhappy in certain situations – and worse, to talk about that – which seems to reduce efficiency.

Without understanding that dealing with complaints effectively can actually improve efficiency – without thought to the additional benefits one gets from an engaged, creatively enabled human being – without being conscious of the temptation (and downside) of wishing employees would just go away and do their jobs – employers and managers may not see the opportunity they’re missing by not fully embracing the fact that employees are people, and always will be. To start with, this is reality. Everyone is better off when they accept reality and start learning to work with it.