Home Uncategorized Employees, Why Aren’t We Engaged at Work?

Employees, Why Aren’t We Engaged at Work? 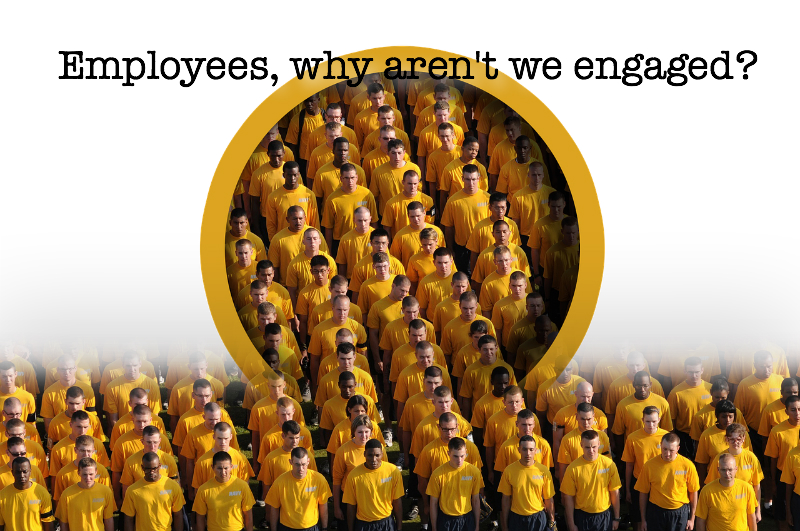 I read a tweet today by Mark C. Crowley, author of Leading From the Heart, who said, “I’m calling myself a failure. Gallup reports that ‪#engagement [i.e., employee engagement] didn’t budge again in January. It’s stuck at a sad 32.5%”. He’s not the failure. He’s one leader who’s humble enough to want to re-examine what he does because he wants to make more positive impact, which is something we need more of. I tweeted back that “I’d be interested in talking about how to bring employees in general into the conversation of why.” He tweeted: “Tell me more.”

Bernie Sanders said there was one thing Obama did that he would do differently. He said that, when Obama got elected, he basically told the millions of people who supported him, “Thanks for electing me. I’ll take it from here.” Sanders talked about the importance of an engaged population in making change possible. An engaged population can be a balancing power to an influential economic sector. It puts pressure on politicians to act on behalf of the people, and it means the people themselves are engaged in making the changes happen.

Does the employee voice know it’s a voice…?

Is the employed population included in the conversation about why employees aren’t engaged? Do they get asked how they could make their workplaces engaging? And what they’d need to make that happen themselves? Maybe within some forward thinking organizations; but what about the general population of employed people? Does the employee voice know it’s a voice in this discussion?

Workers in the Conversation

I’d like to have public, online conversations with lots of workers and employers, and ask those questions. Just like the engaged population, the employee voice is not present at the change management table in a balance with employer voices. The underlying motivation for employee engagement efforts is often profit, and that fact is de-motivating to the human beings who are the workers. It would be great to turn up the volume on the employee voice; it would be great for employers to hear it; and it would be great for the two to talk about what it would take to make engagement more common.

As an employee, what would have kept me engaged was to work with managers as equal human beings, working together on shared goals – including creating an engaging workplace. Individual employee’s potential is an asset that shouldn’t go wasted. Employees and employers could work together on unleashing it.

One point is that, asking employees how they can make their workplaces engaging, is more engaging than asking “How can we fix this for you?” But a second point is to engage the employed population in the conversations about how to solve the issue. This could mean more informed workers, and a societal culture that’s supportive of employee initiated workplace conversations. It’s no small undertaking, and certainly not a quick fix to the problem. But lasting change always takes time, and that doesn’t mean it’s not worth working towards. Also, we never know when our efforts might contribute to greater shifts.

Perhaps employee engagement isn’t changing because the shift towards flatter organizational structure, necessary for greater employee autonomy, isn’t happening fast enough. Like the East Coast fault line, or the marketplace in 2007, maybe a tectonic correction is needed. Empowering workplace cultures like Google and Hubspot with their “start up within a start up” are still unusual.

Employees Engaged in the Problem of Employee Engagement

Of course another thing Bernie Sanders said is that if the U.S. has another election like the last one, where 63% of the population don’t vote, then guaranteed, nothing significant changes. It’s also possible that employees would rather leave the responsibility to the bosses. But if that’s the case, then maybe we should have conversations, with employees at the table, about the disadvantages of doing that. As well as the current worker movements for fairer wages and working conditions, can the worker population get engaged in the drive for creating engaging workplaces?